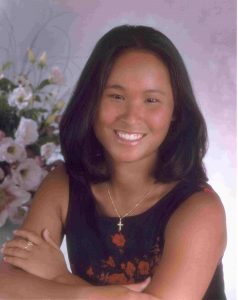 It was exactly four years ago — 10:10 AM on a Monday morning — that my world got knocked off its axis. That was the moment a police officer came knocking on my door to tell me that my daughter had been in an accident.
Later that morning we learned she had died of a cerebral hemorrhage — at age 22, on her way to classes, she died like she’d lived — moving fast, and ahead of schedule.  And that was so like her .
Watsana Soodsawat was born in Bangkok, Thailand and by the powers that flow thru the Universe grew up to join our family in Cleveland, Ohio, USA, literally on the other side of the globe, when she was eight years old.  It was here that Kara Watsana Angela Smith, born with a club foot, grew up to be one of the fastest girls on her soccer teams.  It was here that she completed our family as we embraced her.
Kara was ALWAYS early.  She got antsy if we weren’t walking into a building five minutes before an appointment.  She is the only child I know who ever got bonus points for turning in projects ahead of schedule.  And she was always moving fast — running, biking ahead, and once she got a car, with her foot to the floor.  It was, in retrospect, as if she needed to fit in everything life offered into a compressed schedule.
Maybe, she sensed something.  She died too soon.
In the wake of her death, Happiness was not the first word we used to describe our world.  But we did have our lives to live, and so we moved on and told stories about Kara to keep her memory alive even as we worked very hard to create our “new normal.”
New Normal became our mantra, our companion, our solution to every obstacle we encountered as we tried to put our lives back together.  Saying ‘New Normal’ meant that we accepted that things would never be back to normal, and we had permission to re-create normal in this new world.
After awhile, we noticed that living the principles of happiness for many years prior to Kara’s death had made us strong enough to bounce back.  Our practiced resilience enabled us to accept what we could not change and forge on ahead with optimism.
There will always be a hole in my heart.  There will always be a face missing in new family photos, and a deep sense of loss for what might have been.  Yet, we have our memories to savor, and we have the strength we draw from each other.
and we have, once more, Happiness.  Not happiness that ignores loss, but happiness that embraces loss —  accepts it as part of the complicated mess that life tosses at us — and happiness that is deeper and richer; because we’ve looked into the darkness and we know what is possible when happiness is tested.
Ours is stronger today than ever.  Happiness, you see, rebounds.
In memoriam, Kara Watsana Angela Smith, b 11-15-82 Chang Mai province, Thailand, d 9-28-08, Akron, Ohio.  May she be always happy.


Read more articles like this one in: About Happiness