One of the other speakers at the Singapore HR Summit was Ngahi Bidois, who calls himself a New Age Maori Warrior.  Ngahi — his full name is , Ngahihi o te ra Bidois, which means Rays of the Sun —  is from New Zealand.
20 years ago Ngahi was a college-educated, high-flying, young executive-in-training with a major multinational firm, married to a beautiful woman from the UK, with money in the bank, a house and car, and seemingly having met all the goals he’d set for the himself at that stage of his life.  However, he noticed a hole in his life. 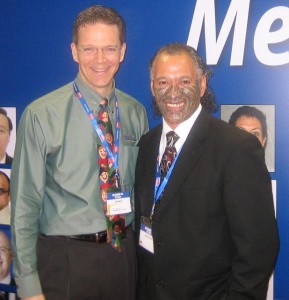 In his talk, he beautifully tells the story of how he came to realize that, in turning his back on his Maori heritage, he was losing a part of himself.  He quit his job and redesigned his life to take his background in leadership and education and use it to strengthen the Maori traditions.  He learned the language of his ancestors, and when he was ready he participated in an ancient tradition, receiving his ta moko, a full-facial tatoo that is the mark of his people, in an 8-hour (very painful!) ceremony. He recently had some incredible photos taken by a guy who’s pix of Ngahi appeared in several national photography magazines.  To see some of the shots (the coolest one is on his home page) visit www.NgahiBidois.com
In his talk on Leadership, Ngahi speaks of being authentic, the importance of listening to others and yourself, and of the importance of Influence in leadership success.  He’s a very inspiring guy, and I was privileged to spend time with him both during a speaker’s forum and at the speaker’s dinner on Wednesday evening.
He is one of the most grounded people I’ve met in a long time — totally happy with where he is in his life.  He really found what was meaningful to him, and now takes obvious delight in taking his message of authenticity and leadership to the world, just as my passion is around leadership and happiness.
Ngahi and I also shared ideas on marketing our messages.  Both of us just finished writing a book and had ‘rush’ printings done so we’d have a small supply to sell at the conference.  Small world!
On a lighter note, the monster.com Monster wandered the huge exhibit hall all during

the conference, and yesterday he grabbed me to take a picture with.  Here’s me and the Monster.  Resumes, anyone?
From Singapore, with Happiness…


Read more articles like this one in: Leadership, Practicing Happiness, Relationships