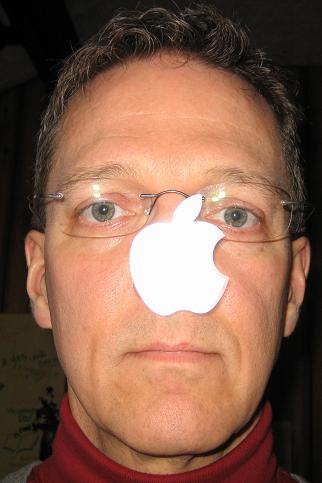 For years I’ve carried on a good-natured banter with my friends and relatives who belonged to what I called The Cult of Apple. They were far too satisfied with their computing experiences for me to believe it was real.  There had to be a catch, right?
I was an Unbeliever.
Someone gave me an old iPod Nano, with which I consumed audiobooks while I worked out.  Soon I graduated to a full iPod to hold my 6,000+ songs, and fell in love with podcasts and playlists.
Then I started loading teleclass recordings, and my iPod became a legitimate business tool. As more colleagues converted their office systems to Apple products and spoke with actual JOY about their experience, I began to think, “Hmm… maybe it’s more than hype…maybe there’s some real advantages???”
My family gifted me with an iPad last Christmas, which opened up a new world of accessibility and portability, including a means for devouring books via my iBook and Kindle apps.  It also syncs seamlessly with my music and audio files.  Nice.
Last week, my four-year-old LG mobile officially died.  I’d been in denial for weeks, but as more and more buttons stopped working, I had to face reality: I needed a new phone.  At the Verizon store I considered multiple alternatives, and in the end, noticing how the employees themselves were salivating over the iPhone, I decided to make the leap.
I joined the Apple Cult.  Oh, My, Goodness! This is the most complex technology I’ve ever carried in my pocket, yet the conversion was painless.  I brought it home, plugged it in to my computer, and iTunes asked, “do you want this to look like your iPad?”  I said, yes, and in 30 minutes I had a fully-functional, totally synced iPhone in my hands…. And in just a few days, it has changed my life!
My six-year old laptop has aging “issues,” and my desktop has had its brains replaced twice and keeps trying to commit suicide. I hear the siren call of the Apple cult, drawing me in…


Read more articles like this one in: Everyday Happiness, Leadership, Pleasure