Last week I was privileged to attend Kent State University’s annual Student Awards night.  At this event the university recognizes the accomplishments of its many student leaders and student organizations; it also serves as the transition point for all Undergraduate Student Government (USG) positions.
During the past school year our youngest son, Jared, was a Student Senator in addition to serving as president of the largest fraternity on campus, Sigma Chi.  He will serve as one of the six elected USG Directors for the 2009/10 term.  We drove down to see him recognized for his contributions and then sworn in to his new role.
We sat at a table with many of Jared’s fraternity brothers and were delighted to see the quality of character so many of them possess.  These young men, some about to graduate in a few weeks, represent the next generation of leadership for our country. I feel inspired when in the presence of their energy and determination to succeed and create change.
I was pleasantly surprised, as I scanned the evening’s program, to see many of these young men’s names on the list of nominees for several awards.  I was proud to bursting as I realized that Jared’s name was listed for seven out of twelve possible leadership awards, in addition to his USG recognition.
Jared went up on stage several times during the evening to receive recognition for his contribution and accomplishments.  The awards he was nominated for acknowledge leadership, scholarship, commitment to the university, contribution to the community, and so on.  These are all admirable qualities in any young person, and even more fun to watch when that young person is my own child.
I was a proud and happy Dad, for sure! 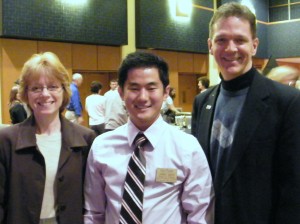 
Read more articles like this one in: Everyday Happiness, Leadership, Relationships