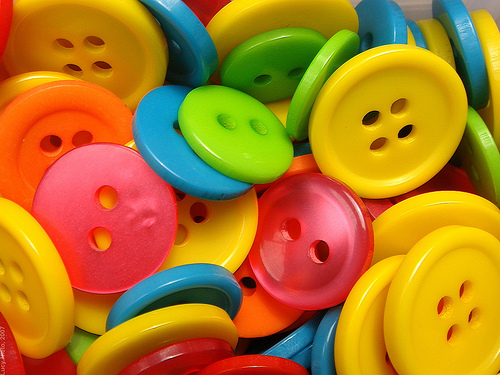 Do you remember learning to tie your shoes?  Put on pants?  Button a shirt?
Neither do I, but last evening I was reminded of the experience.  I had the pleasure of giving my three-year-old grandson his bath.  After I dried him off, he escaped and ran naked into his room, all excited — he has a new set of pajamas!  Before I caught up with him, he’d slipped the pajama top over his shoulders and I saw it was a new design — buttons, versus a t-shirt.  As I knelt down to assist him, I noticed his face had taken on a look of intensity, so I backed off to just watch what he’d do next.
Buttoning a shirt is something I can do automatically, while I’m having a conversation or thinking about something else or while simultaneously putting on my shoes.  For Jonathan, buttoning a button is a brand new life experience, and one he is determined to do well.
First, he carefully lined up the bottom of the pajama shirt so the corners were together.  Holding the lowest button, he lined it up with the lowest button hole, and began the process of inserting one into the other.
I had to resist the urge to help, but after a few minutes I relaxed against the wall and breathed it all in.
It took him nearly 10 minutes to secure just four buttons.  Not once did his attention shift from the task.  He was patient, and he was determined.  He tried multiple ways to hold the button, to line it up, to pull it thru, to push it thru the hole.  When one way did not work, he simply kept going.
When he finally finished, he looked up and his face was just beaming!  He was so proud.
Then, onto the next challenge — putting on the pants.  When you’re three years old, there’s always something new.
“Ah, if only life were this simple,” I thought.
Then again, maybe it is.  There’s nothing to stop me from just focusing on One. Thing. At. A. Time.
Photo courtesy Lucy Nieto via Compfight


Read more articles like this one in: Everyday Happiness, Pleasure