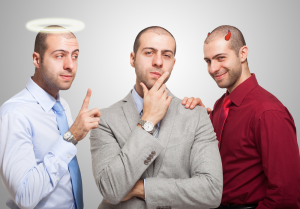 Story:  I’m sitting in a coffee shop, writing.  Background music creates a white noise, masking multiple streams of conversation I only half-notice from within my envelope of concentration.
Whenever a new customer walks in, the bright-eyed, caffeinated barista asks, “How are you this morning?” Most respond with a simple “fine,” or “okay.”  Some brave a “great!” or the oft-obvious “I need coffee, first!”
One guy loudly replies, “Shitty!”  A pause (2, 3, 4…).  “Oh….” Then, falling back into her usual patter, she asks, “Well, what can I get for you today?”  Ah, but he doesn’t want to let it go.  In what can only be described as his ‘stage voice’, the patron continues: “You’ll find out when you’re older. It’s shitty being old.”
By now, all other conversations have paused while everyone in the shop watches this mini-drama unfold (he’s being too loud to ignore). I look up to see who’s talking. The gentleman is probably my age, plus or minus; he sports grey hair around the temples and a bit of a paunch.  He seems to be walking fine, all his limbs work, he has a nearly full head of hair, and apparently he has enough discretionary cash to afford a large mocha cinnamon latte thingy.
Yet he chooses to describe his mood as “shitty” as he pinches his face into a scowl.  I wonder what sort of day he’s having, as he shuffles grumpily along, proclaiming his mood as though it is an unbearable weight, an inescapable consequence of aging, a mood he is condemned to carry.  No one really wanted to continue conversation with him.
Is his day REALLY shitty?  Well, as soon as he spoke it into reality, it was.
~~~~~~~~~~~~~~~
Two days later, I’m having breakfast in a diner when three older gentlemen are seated at the table next to me.  One of them trails behind, his walker stuck on a chair leg.  He sits slowly and carefully, using gnarled hands to pull his legs around underneath the table.  The server for our section sweeps by with a tray full of food for another table and chirps, “I’ll be right with you guys. How y’all doin’ today?”
The walker guy bounces right back with, “Not bad, for a kid!”
Wow, what a contrast!  I’m betting that walker guy is having a much better day than the coffee guy – and so are the people around him.
~~~~~~~~~~~~
“But Jim,” some say, “it’s just words.  Not everybody is all chipper and positive.  I’d rather tell the truth than lie about how I’m feeling!”
OK, I hear you, and I agree that ‘lying’ is not usually a good strategy.  Yet I believe they are more than “just words.”
There is great power in language.  Language is an action – what you speak creates a new perspective on whatever reality existed a moment ago. Words and the energy they carry can create or destroy – and they define us as individuals in addition to defining our world.  Yet even though we know this, we often let them flow out unattended, until suddenly we encounter negative consequences.
So much of the pain we cause ourselves and each other could be avoided if were just a bit more attentive to what we say.  Our relationships, our work environment, even our feelings about ourselves, can be transformed simply by taking time to think about how words create our reality.

Do This For Yourself

The first step in changing your world is to start becoming conscious of what you say – both aloud to others and (in your head) to yourself.
For the next week, be aware of not just what you say but also the way you say it.  See if you can sense the emotional effect your words create.  How do you feel after you speak?  How do other people react?  How is what you’re saying changing the mood of the conversation?  What “spin” are you putting out there to shift the way you or others are looking at a situation?
I promise you that when you observe, you’ll notice new opportunities for yourself.
The 13 Principles of Happiness offer a framework for a happier life. Print a copy here, and post it on your workstation or fridge as a reminder to live your life deeply and from a happy space.