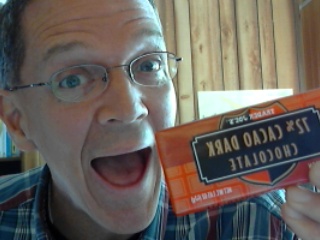 This news is a month+ old, but it’s really timeless, and it made me happy, so I’m sharing with you.  Science proves that Chocolate is GOOD FOR YOU!

Chocolate Good for the Heart and Brain, according to new meta-analysis

August 29, 2011 (Paris, France) — In a city renowned for its love of food, it is only fitting that researchers presented the results of a new study in Paris, France, showing that chocolate is good for the heart and brain. In a presentation at the European Society of Cardiology (ESC) 2011 Congress, British investigators are reporting that individuals who ate the most chocolate had a 37% lower risk of cardiovascular disease and a 29% lower risk of stroke compared with individuals who ate the least amount of chocolate.
In the study, published online August 29, 2011 in BMJ to coincide with the ESC presentation, Dr Adriana Buitrago-Lopez (University of Cambridge, UK) and colleagues state: “Although overconsumption can have harmful effects, the existing studies generally agree on a potential beneficial association of chocolate consumption with a lower risk of cardiometabolic disorders. Our findings confirm this, and we found that higher levels of chocolate consumption might be associated with a one-third reduction in the risk of developing cardiovascular disease.”
In this meta-analysis of six cohort studies and one cross-sectional study, overall chocolate consumption was reported, with investigators not differentiating between dark, milk, or white chocolate. Chocolate in any form was included, such as chocolate bars, chocolate drinks, and chocolate snacks, such as confectionary, biscuits, desserts, and nutritional supplements. Chocolate consumption was reported differently in the trials but ranged from never to more than once per day. Most patients included in the trials were white, although one study included Hispanic and African Americans and one study included Asian patients.
Of the seven studies, five trials reported a significant inverse association between chocolate intake and cardiometabolic disorders. For example, individual studies showed reductions in the risk of coronary heart disease (odds ratio 0.43; 95% CI 0.27–0.68), the risk of cardiovascular disease mortality (relative risk [RR] 0.50; 95% CI 0.32–0.78), and the risk of incident diabetes in men (hazard ratio 0.65; 95% CI 0.43–0.97).
Overall, the pooled meta-analysis results showed that high levels of chocolate consumption compared with the lowest levels of chocolate consumption reduced the risk of any cardiovascular disease 37% (RR 0.63; 0.44–0.90) and stroke 29% (RR 0.71; 0.52–0.98). There was no association between chocolate consumption and the risk of heart failure, and no association on the incidence of diabetes in women.
The researchers note that the findings corroborate the results of previous meta-analyses of experimental and observational studies in different populations showing a similar relationship between chocolate and cocoa consumption and cardiometabolic disorders.
“These favorable effects seem mainly mediated by the high content of polyphenols present in cocoa products and are probably accrued through the increasing bioavailability of nitric oxide, which subsequently might lead to improvements in endothelial function, reductions in platelet function, and additional beneficial effects on blood pressure, insulin resistance, and blood lipids,” conclude Buitrago-Lopez and colleagues.
<end of press release>
Well, I’m not even pretending to understand that last bit, about endothelial function and whatnot…. but in celebration of this news, I’m having myself a couple pieces of a Trader Joe’s 72% Chocolate bar — because even generic chocolate makes me smile!

Read more articles like this one in: Everyday Happiness, Pleasure